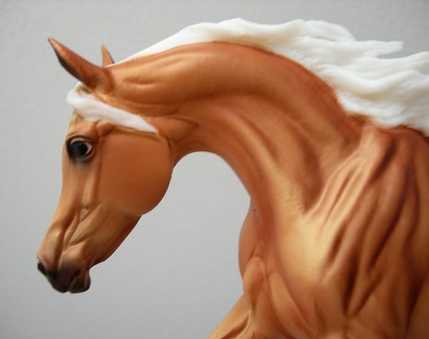 Aburaya (Thomtidom x Amaki's Rabecca ®)
Aburaya
Type : Arabo-Teke, PBA
Age : *2006
Gender : mare
Color : golden palomino
Markings : star into stripe, right hind high sock, left hind low sock
Sire & Dam : Thomtidom (*2003) & Amaki's Rabecca ® (*1986)
Sculpture : "Breyer Weather Girl Sunny" by Breyer Reeves Co. (USA)
Finishwork : Factory OF (original finish)
Aburaya is a gorgeous PBA mare... she has Akhal-Teke blood in her from her sire Thomtidom and has an exquisite pedigree, making her very special and good looking... her metallic coat is very striking, as is her rich candy-golden coat and discreet white markings... a real queen among our mares...
She is the beautiful Weather Girl mold by Breyer, sculpted by Brigitte Eberl of Germany... She is the palomino version named "Sunny" and is a beautiful rich, caramelly metallic colored model...
She came to us from Germany and is a daughter from the lovely gold palomino PBA mare Amaki's Rabecca ®, an exquisite mare, residing in Australia...
Her name is inspired by the magical enchanted village of "Aburaya" in the beautiful anime movie "Spirited Away" by Hayao Miyazaki, which I so much adore...
It could easily be translated as "Fairy Land" in English :)

Aburaya's foals are real treasures to our breeding program... This mare always passes on her beautiful lines and her tipyness onto her products... She makes us very proud and we are eager to discover what she produces next :)