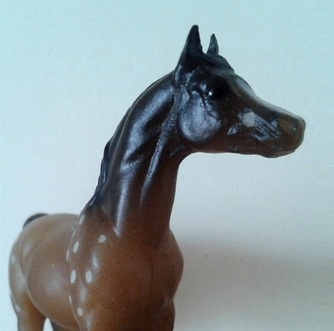 Astronomite (Saxon Re'em x Aur Silver Myst ®)
Astronomite
Type : Russian/CMK (Crabbet/Maynesborough/Kellogg)
Age : *2011, non aging
Gender : stallion
Color : bay going grey with chubari spots
Markings : blaze ending in pink between nostrils
Sire & Dam :  Sa﻿﻿xon Re'em (*1996) & Aur Silver Myst ® (*1998)
Sculpture : "Breyer G1 Stablemate Arabian Stallion" by Breyer Reeves Co. (USA)
Finishwork : OF (original finish) Special Run 1997 from JCPenney in "dappled dun"
Astronomite came to us from Italy. He is by our gorgeous deceased Russian stallion Saxon Re'em and from a particularly exciting CMK mare named Aur Silver Myst ®. This beautiful mare has produced 2 foals with distinct chubari/tetrarch spotting out of the famous chestnut sabino stallion Aul Magic ®. These two colts are Aul Turbo Charged ® and Aul Platinum ®. Both are grey with bold chubari spots. It is possible that our depigmented grey stallion Saxon Re'em contributed to this exotic coat as well, but since the color genetics are complex regarding this inheritance, it is hard to say.
Astronomite has a visibly exotic coat and he is greying out very slowly. His bay base color is predominant, making the chubari spots even more dramatic.
He was named after the beautiful Australian gemstone : astronomite, which in Italian and English has the same spelling. The stone is famous for its round planet-suggesting spots, making it a very exotic looking gemstone. The spots are orangey on black base, which came to mind as soon as we spotted this colt's coat color.
Astronomite has a truly unique pedigree and his conformation and beauty are flawless.
He is a Special Run model by Breyer on the G1 Stablemate Arabian Stallion and was issued by JCPenney in a limited number in 1997. The color is very bold and makes him a real standout.