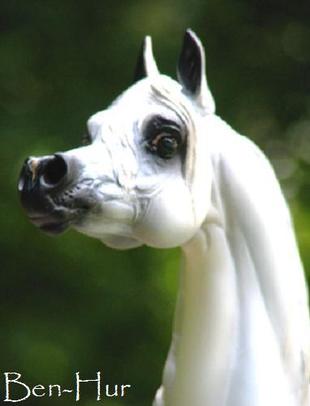 
photo above is courtesy of Vicki Keeling.
Ben-Hur is our majestic colt by Ouroboros...
He is one of our young stallions and is now serving your STRAIGHT EGYPTIAN mares :)
You can see from the many photos, he carries all the incredible and gorgeous features of his noble father Ouroboros...
Jet black at birth, Ben-Hur greyed out very fast and is now a striking white grey with some faint dappling left on his haunches and buttocks... His silky mane and tail have a magical golden sheen and eventhough his coat looks snowwhite in the sun, it is wrapped up in a soft shaded grey hue which will fade out completely once he is older...
He is the epitome of the classical grey Egyptian Arabian which is so prized worldwide... His genes carry and seal the Babson heritage of his beautiful mother Zam Zam...
This is the Abu Asaalah resin by Vicki Keeling, painted by Vicki herself one of her signature white/light dappled greys... he was directly imported from the USA.

Thank you for considering Ben-Hur as your next sire !!!
He is perfect for you, if you are looking for a classical, striking Egyptian-bred stallion with a superior pedigree, beautiful character and timeless appearance...

Check out his pedigree, progeny & photos below  :)

Our magnificent SE-Babson bred Ben-Hur is proudly standing at stud for your Straight Egyptian beauties...
He is eager to produce impeccable foals and pass on his outstanding legacy...
Please contact us if you want him as your next sire !

Progeny not owned by MirrorManor is indicated in red font.﻿