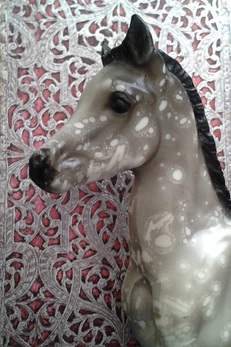 The birth of this colt has been a little sensation here at MirrorManor ! Not only is he an absolute beauty of an Arabian foal... he is furthermore a little coat color genetics' wonder ! In fact, he seems to have inherited the exotic coat of his dam - Straight Egyptian/Crabbet Arabian mare Papuaa ®, who is owned by Lords Hill Stud in the UK. Papuaa ® is a striking chestnut beauty with rare birdcatcher spotting, which on occasion can be found in purebred Arabians. This trait is often passed onto offspring directly, but it is rare and depending on the individual, can vary with age - sometimes appearing all of a sudden and sometimes disappearing or fading with time. What makes this foal a sensation is the fact, that it shows this kind of spotting at such a young age and in a rather extensive form, as well as it presenting spots which are haloed. We are curious to discover, if time will change his spotting or if he will completely lose it.
In the photo gallery below, you will find the photo of a famous filly - Mumtaz Mahal ®, showing the same birdcatcher spotting, present at a young age.
Calimero was sired by our Russian stallion DA Pierrot du réverbère, who passed his black base color and his grey gene onto his son.
Calimero was named after a famous Italian cartoon about a charming, but helpless chick; the only black one in a family of yellow chickens. He wears half of his egg shell still on his head. Calimero originally appeared on the Italian television show Carosello on July 14, 1963, and soon became a popular icon in Italy. We thought it was fitting, as this colt is so rare.
He is in the famous Breyer PAF mold, in the rare and sought after "black point" variation. This one is particularly valuable, as it has the rarer "halo spotting" and on top of that is almost a full gloss and not just semigloss in the OF finish.