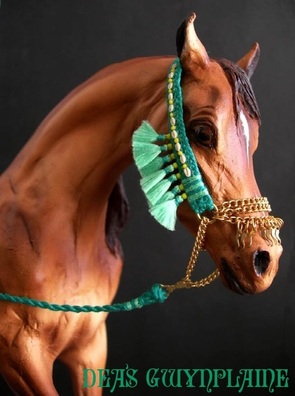 Gwynplaine is our little sweetheart at MirrorManor... he is the third Arabian to have joined my Arabian modelhorse herd, after Anubis and Ouroboros...
I had been admiring Pam DeMuth's Purmer resin for a long time and since he is long sold out I think I was very lucky to have stumbled upon a very unusually colored copy on the MH$P site over 3 years ago... it was love at first sight and he cost less than body price, so I immediately had him imported to Europe, where he enjoys a permanent loving home and has gifted us with several adorable foals...
His name is inspired from the "The man who laughs", a novel by Victor Hugo and 1928 silent film on Gwynplaine, the beautifully tragic character loved by the blind girl Dea... an immortal classic full of power and depth... it was the perfect name to give to this sweet, sensitive Arabian...
His color is something that needs to be seen to be believed... a striking unusual chestnut with lots of shadings and contrasts, a coppery mane and tail and the softest dramatic rabicano markings make him stand out and make a statement...

Thank you for choosing Dea's Gwynplaine as sire to your next foal(s) !!!
He is the perfect sire for you, if you want a refined, exotic and out of the ordinary Arabian or Part-Arabian foal...

Gwynplaine is the sire of many gorgeous foals at MirrorManor and abroad. He often passes his exotic subtle rabicano coloring onto his foals or then his beautiful rich caramelly chestnut color.
The list of his progeny says it all... here and abroad, his foals are truly outstanding. All of them carry the refined and delicate features of their father...
Dea's Gwynplain is a total gentleman and a striking beauty... he often goes a bit under and is unnoticed due to all the other bold handsome stallions standing at MirrorManor. Often though it is the silent waters that run deep, therefore you should not pass him by, he might surprise you ;)
At this point Gwynplaine is available to purebred and partbred Arabian mares.