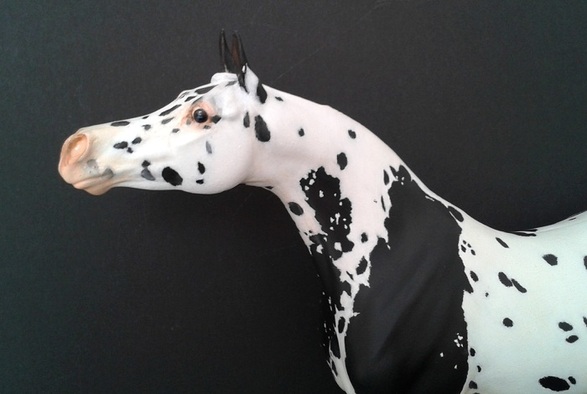 Graógramán (H.H. Romeo ® x Spukstadt)
Graógramán
Type : Araloosa
Age : *2007
Gender : gelding
Color : black manchado-type leopard appaloosa
Markings : wild leopard markings (no socks or stockings)
Sire & Dam : H.H. Romeo ® (*1983) & Spukstadt (*2003)
Sculpture : "Tsunami" resin by Jennifer Kistler (USA)
Finishwork : painted by Gudrun Schmitt (Germany) with minor alterations by MirrorManor
Breeding : PRIVATE TREATY (frozen semen only)
Graógramán is a true one-of-a-kind beauty.
He is our pintaloosa mare Spukstadt's first offspring, sired by the one-and-only Araloosa phenomenon H.H. Romeo ®, which is a most famous and exotic colored Part-Arabian, descending from the immortal Gharib ® in the paternal line and Anchor Hill Halim ® in the maternal line. Romeo passed his multicolored coat onto many of his foals, including Graógramán, who truly looks like a mirror image of his father.
Just like his fantastic coat, his pedigree too, is incredibly elaborate, containing many exotic and influential names, tracing back to the great Talata Escrin ®, to name just one.
After a freak accident during transport, he had to be gelded, to avoid complications from his injuries. Since we collected his precious semen for breeding requests by shipped vials before the accident, we are able to get and offer offspring from this unique horse.
The coat of this gorgeous horse is truly something... certainly, it is inherited from his sire, which is famous for his coat in the Araloosa/Ara-appaloosa world, but even then, we think that the uniquely marked pintaloosa dam too, contributed to its unique beauty. His foals will certainly be one-of-a-kinds too, that is certain.
Graógramán was named after the famous character in Michael Ende's Neverending Story, just like his mother, Spukstadt. He was the lion that was also known under the name of Colorful Death, dying every evening to enable the nightly forest Perelín to come to life and waking up every morning anew, like the phoenix rising from its ashes, to live again and allow the colorful desert Goab to exist. We thought it suited him to perfection, since like the character he symbolizes immortality and has a coat of many colors, so beautiful that it "kills".
This is the Tsunami resin by Jennifer Kistler, painted by German artist Gudrun Schmitt as portrait of H.H. Romeo ®, which we appropriately chose as his sire. With the artist's permission the eyes were painted brown by myself, as they originally were blue; we also added body shading and pink skin and "dirt" variations where appropriate, using oils to achieve subtle and smooth blending effects.
Inquire for more information if you are interested.

Check out his pedigree and photos below :)

Graógramán has sired magnificent PBA foals through AI (artificial insemination), as we have his precious semen available for breeding.
Please contact us if you are interested in a foal by this outstan﻿﻿ding


Araloosa ﻿﻿or for further information.