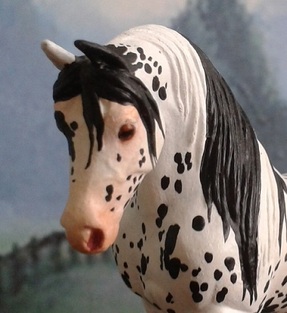 KGs Underverse (Graógramán x Sa Jana Ichnussa)
KGs Underverse
Type : Araloosa
Age : *2014, non aging
Gender : colt
Color : black leopard appaloosa with "giant" spots
Markings : left stockings, right socks, 4 light hooves
Sire & Dam : Graógramán (*2007) & Sa Jana Ichnussa (*1999)
Sculpture : "Breyer G3 Stablemate Arabian stallion" by Jane Lunger for Breyer Reeves Co. (USA)
Finishwork : painted by Kollean Gouyton / StoneWolf Creations (USA)
KGs Underverse is our gorgeous Araloosa colt by our Araloosa gelding Graógramán. He is a very close mirror image of his beautiful sire and like him, carries a truly unusual and striking coat - leopard appaloosa with several "giant" spots. He is a very elegant sight and if it was not for his exotic and wild colored coat, he would be taken for the purest Arabian... Both his parents look like purebred Arabians, but carry most exotic appaloosa coats... a truly stunning combination !
KGs Underverse is an original creation by Alaskan artist Kollean Gouyton (KG in his name) of Stone Wolf Creations on the Breyer G3 Stablemate Arabian, which comes in the stallion and mare version. This one is the stallion OF mold, handpainted by Kollean.
This handsome colt's name was taken from the "promised land/universe" in the world of the "Chronicles of Riddick" movie... the wonderful "underverse", to which the Necromonger people hope to one day get to.
KGs Underverse came to us directly from beautiful Alaska, in a trade with the artist. Thank you, Kollean, for this little treasure :)