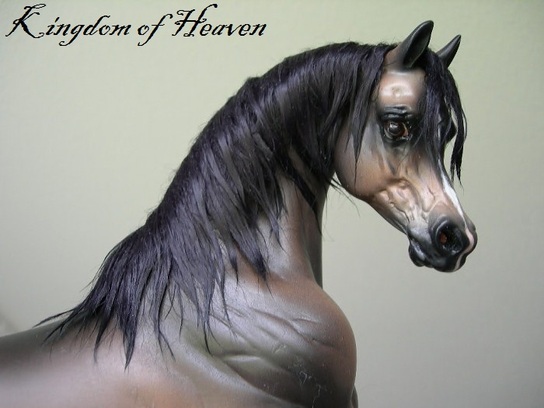 Kingdom of Heaven (Dark Water x Amun Bint Kaishana ®)
﻿Kingdom of Heaven
﻿Type : Weil-Marbach / Straight Egyptian / Straight Russian
Age : *2009
Gender : stallion
Color : seal bay
Markings : narrow blaze melting into narrow snip, hind socks with ermine spots
Sire & Dam : Dark Water (*2005) & Amun Bint Kaishana ® (*1987)
Sculpture : "Sabir" resin by Vicki Keeling (USA)
Finishwork : painted, haired, shod by Faye Cohen/Ansata (USA)
Breeding : OPEN TO PUREBRED ARABIAN MARES ONLY
Kingdom of Heaven is our Arbatax's half-brother... he is another beautiful Weil-Marbach blooded stallion.
Just like Arbatax, he was love at first sight...
This horse was first exported to Australia (the last two photos in the gallery below, show him in Australia), then Germany... We are happy and honored to finally have imported him to Switzerland, to his permanent and forever home, after all the travelling he has behind him...
He is Vicki Keeling's Sabir resin and was immortalized by the talents of the one-and-only Faye Cohen, who painted, shod and haired him with mohair... When he arrived here, his mohair had to be completely restyled, as previous owners ignored the VARA protection applied by Ansata and brushed it completely out, ruining the value and appearance of the piece. With Faye Cohen's kind assistance and help, we were able to completely restore the piece by restyling the mohair. A big thank you goes out to Faye Cohen / Ansata, for her kind help and guidance !
Kingdom of Heaven has a very unusual and striking seal bay coat, topped with the most intricate and delicate facial markings and socks with ermine spotting.
He truly is a gift from Heaven !
He is the product of our extraordinary Dark Water and from Amun Bint Kaishana ® (*1987), a beautiful bay Gharib ® daughter from Kaishana ® by Kaisoon ®.

Kingdom of Heaven is now serving your PUREBRED Arabian mares :)
As you can easily see from the photos, he carries the refined lines and beautiful characteristics of both his parents, featuring some of the finest Weil-Marbach, Egyptian and Russian Arabians in his exquisite pedigree...

Thank you for considering Kingdom of Heaven as your next sire !!!
He is perfect for you, if you are looking for an exquisitely beautiful, refined Weil-Marbach type Arabian stallion to sire your next champion !!!

Check out his pedigree and photos below :)

Kingdom of Heaven is one of our young studs here at MirrorManor Arabians. He is eager to pass his incredible features onto his sons and daughters...
One look at his beautiful self already hints to the magic awaiting in his products...
As a bearer of the Egyptian, the Russian and the German Arabian heritage of the Weil-Marbach lines and with his fine pedigree he is destined to be an asset in any breeding program looking for a handsome quality Arabian sire.
Kingdom of Heaven will be standing at stud for a few very selected mares... please contact us if you want an exceptionally outstanding sire for your future foals !