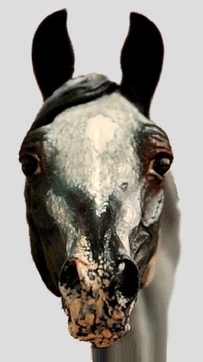 photo above is courtesy of Haras de Falde / Laurence Cassin
Neige de jasmin is truly an outstanding mare... not only optically, but also for her pedigree, which shows one of the most "clever" breedings among the finest purebred Arabians - most of them Straight Egyptian, EAO, Blue Star, some Polish and Weil-Marbach - and, to add the beauty and exotism of an appaloosa color, Appaloosas and Warmbloods in her sire's dam line... The result is this incredibly exotic Araloosa mare, which we acquired in a trade from France.
Neige de jasmin is French for "jasmin snow" - a lovely name, matching the beautiful extended spotted blanket she features on her intricate, wild, roany appaloosa coat...
Her mother is our elegant and refined luscious black Reína Shardana and her father is the lovely Gigabyte ®, who is an outstanding chestnut extended spotted blanket Araloosa stallion, with 75% Arabian blood ! He is standing in Germany, owned by the Appel family at Arabians.de.
Like her dam, Reína Shardana, she is out of the talented hands of American artist Stacey Tumlinson; this time it's her "Gizelle" resin, which was painted in oils by French artist Laurence Cassin of Haras de Falde.
We are proud to own such a beautiful creature and are blessed by her outstanding and exotic looking progeny ! Stay tuned...

Neige de jasmin is one of our Araloosa mares... despite being a young broodmare, she has a very strong character and is very protective and affectionate...
Her foals are very exotic and an asset to our PBA breeding program. Stay tuned for her future treasures :)