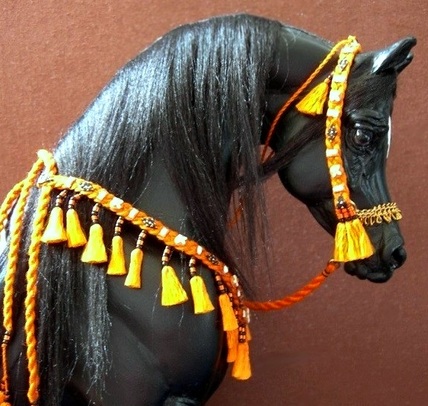 Ouroboros is literally born out of a dream I had... I dreamt of a luscious black Arabian stallion that was prancing around with his mane and tail flowing in the wind... tossing his head in the typical Arabian manner and showing off...
I woke up and knew I had to get a black Arabian stallion to add to my modelhorse collection... thus, Ouroboros became my second Arabian artist resin and joined Qublat Anubis after 4 years in 2007...
He is the "King's Ransom" resin by Vicki Keeling that was painted and haired with ramie by Sheena Stuart of the UK...
I found him on the MH$P-site and jumped on him, as he was simply too stunning to pass up, matched the horse in my dream and had a very good price, considering the make...

His name is inspired from one of the many wonderful and meaningful creatures found in ancient bestiaries, which I absolutely adore... the most evident translation is the attribute of eternity and of perpetuity... no beginning and no end to his beauty...
Ouroboros is one of our most successful studs... he is very sought after and has sired foals in 6 countries and 3 continents !!!!!!! That is quite an achievement for a modelhorse standing at stud and barely advertized !!!

He knows perfectly well what he is and loves to show off and do his great "boy show"... especially around mares... he is very well mannered though and is an extremely sensitive and attentionate stallion, taking his time and never imposing, if a mare is inexperienced or shy...
Ouroboros is easy to handle and makes us very proud. His progeny is incredibly tipey and each foal reflects the beauty of its father...
He is the perfect sire for you, if you are looking for a striking, bold and overall gorgeous Straight Egyptian Arabian...

Ouroboros has sired foals in Switzerland, Germany, Italy, the USA and Australia.
He is not homozygous black and can therefore sire non-black foals as well, although most of his foals are black.
He is available to Straight Egyptian Arabian mares only, but depending on the mare, we can discuss your needs and exceptions might be made.
All of his babies do carry his gorgeous Egyptian features and refined attributes...