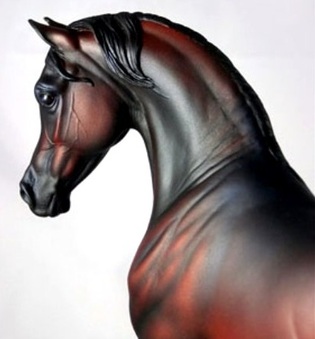 photo above is courtesy of Karla Rankin
Poupée russe is our Russian beauty at MirrorManor... she is a striking deep dark mahogany bay with flashy white on her, making her truly look like an elegant, floating ballerina when she trots and canters on her lovely four high white stockings...
As her name suggests, she truly is a doll through and through... A lovely sensitive mare and a caring and loving mother to all her foals...
We have imported her from Canada a few years ago and just like her, her progeny shows the proud lineage and elegance of this mare !
Poupée russe is the "Musetta" resin by Deb McDermott which was painted by the incredibly talented Karla Rankin to this typically Russian-bred type of bay Arabian, winning a Top Ten placing at the North American Nationals (NAN) in 2007 !!!
This beautiful Russian mare has the softest and most lifelike expression... one look into her face and eyes and you melt away...
Her pedigree is absolutely exquisite, with some of the greatest Russian Arabians in it, ensuring quality and tipyness in her foals...

Poupée russe is an incredibly sweet and loving mother... she has gifted MirrorManor with several incredibly beautiful and tipey foals. She was also exceptionally leased to a friend in Italy, to produce a foal by the gorgeous Vadeer ®.
We are proud to have her in our barn and are eager to see what more beauties she will produce...