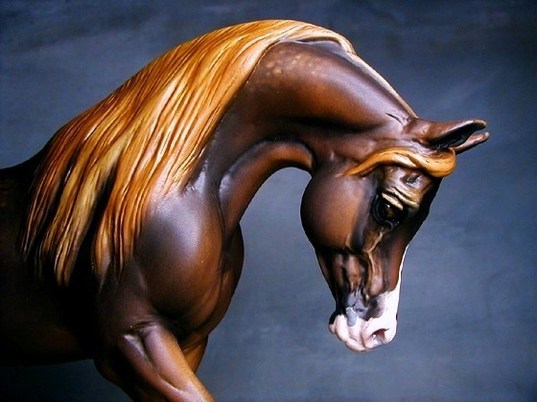 photo above is courtesy of Jennifer Danza
Anubis is my very first Arabian artist resin...
He was love at first sight when I found him and I knew I had to have him done as a very unique piece...
He is the "Sadeek" resin by Vicki Keeling that was turned by her into a one-of-a-kind (he has an exposed gland) and got his own custom made walnut base on which he can be displayed if desired, since he also stands without...
The wonderful Jennifer Danza pastelled him into this stunning and lavish liver chestnut sabino with delicate dappling here and there... he has incredible detail and rich, vibrant color...
Liz Shaw of Australia created the orange Bedouin style presentation set for him around 2003... it fits him so well and shows his regal beauty...

Mr. Bashir Bserani himself has helped me name him when I got him... I have always adored the Anubis deity and wanted to call this beautiful stallion "Kiss of Anubis"... Mr. Bserani indicated the correct Arabic form to me and thus, Qublat Anubis was born...

Anubis is an incredibly well mannered and experienced stallion... he knows what he is and what is expected from him... he gives us much affection and makes us very proud... it is an honor to own this gem of a creature of God and to get even more treasures in the form of his foals...
Anubis is extremely docile and gentle... he is a gentleman through and through and full of grace and nobility, yet with a modest character...
He is the perfect sire for you, if you are looking for a beautiful, elegant and classic Asil Arabian...

Anubis is a very sought after sire... he sired several beautiful foals for MirrorManor and also for breeders in Sweden, Italy and Canada.
Depending on the dam, he passes more or less sabino, and some with barely any expressed. All of his progeny does carry his Asil traits and refined classic features...
Presently he is available to purebred Arabian mares only. Please contact us to book this exceptional gem as your next sire !