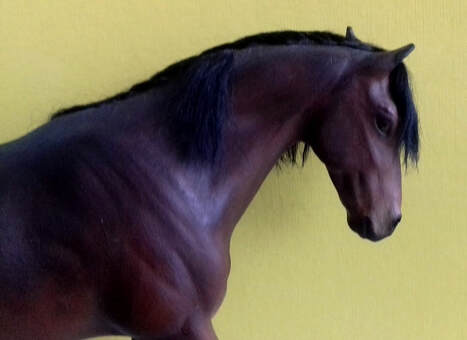 Gairo fantasma (Jerzu x (Sarcidano horse mare ®))
RB Gairo fantasma
Type : Partbred (Sardinian Anglo-Arabian x Sarcidano horse)
Age : *2000, non aging
Gender : gelding
Color : brown
Markings : none
Sire & Dam :  Jerzu (*1994) & unknown Sarcidano horse mare ®
Sculpture : "OSC" (original sculpture) by Renate van der Graaff (Germany)
Finishwork : sculpted, painted & haired by Renate van der Graaff (Germany)
RB Gairo fantasma is a very special horse. Very dear to us, very unique.
This horse came to us from Germany, after having lived some time in the Netherlands. We located him, being one of our retired AAS stallion Jerzu's foals.
We purchased this beautiful gelding from a wonderful lady, who had him for almost 20 years, first in Holland, then in Germany, after she moved there. We don't have any information on his dam, other than it was a solid brown Sarcidano horse mare, whom Jerzu had been bred to, when still in Sardinia. Gairo was purchased and exported by the Dutch lady, who sold him to us, after we fell in love with him and told her we own his sire.
He looks so very Sardinian... all of their horses' heritage and looks are so evident in this horse. He has both the small size, robustness and at the same time their elegance and lenity.
His movements and gaits are as smooth as silk. He certainly inherited those from his sire, whose breed combines the nobility and pureness of the desert Arabian and the history and majesty of the English Thoroughbred. Jerzu's breed still carries old Sardinian horse breeds' imprint, which is even more predominant in Gairo, due to his dam, being a Sarcidano horse - one of the breeds used to create the Sardinian Anglo-Arabian.
He has no chrome at all that would detract from his amazingly smooth and rich dark brown coat. He has soft pangaré areas and his full jet black mane and tail are smooth and shiny as silk.
This beautiful model is an original creation by Dutch-German artist Renate van der Graaff. She sculpted, painted and haired this sculpture.

His name needs some explanation...
Respecting van der Graaff's "studio" name, he carries the prefix "RB", which stands for "Riverbend" and is usually placed in the names of her creations.
"Gairo" is a village in Sardinia that was destroyed several times by heavy flooding in the 1920s and mostly in 1951, which saw it completely entombed by mudflows, after the heavy storm, that year. Some villagers stayed at first, but ultimately everyone abandoned their destroyed property. The village was rebuilt on more stable ground, in different areas, resulting in 3 or 4 new "districts". The original "Gairo", became "Gairo vecchio" - Italian for "old Gairo", its remains were left to the ravishes of time... it became a ghost town.
"Fantasma" is Italian for "ghost".
"Gairo fantasma" means "Gairo, the ghost town".
RB Gairo fantasma is a unique model. He reminds me of my late dad, who was from Jerzu, the village near Gairo.