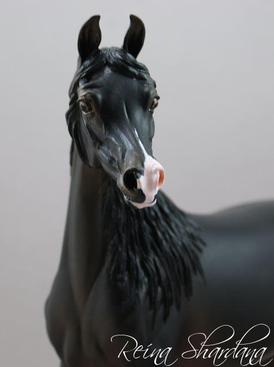 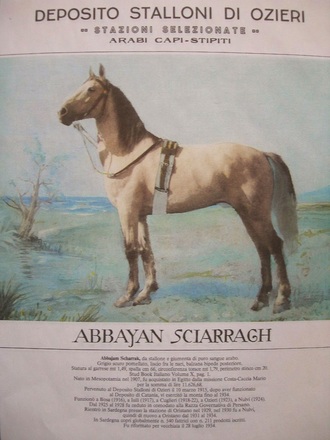 ﻿Reína Shardana means "Queen of the Shardana" in Sardinian dialect... Reína is the Sardinian word for "queen" and the "Shardana" (also known as "Sherden" or "Serden") are one of several groups of "Sea People" or "pirates" who appear in fragmentary historical records (Egyptian inscriptions) for the Mediterranean region in the second millennium B.C. ...
Among the many myths surrounding them, there is one believing that the Shardana were the mythical inhabitants and founders of the 6th continent, an island known as "Atlantis", which in myths was thought to be none other than Sardinia... The Sardinian island actually gave the Shardana people their name, breathing some grain of tenability to its atlantidian myth...
I wanted to give this mare a Sardinian name because of her descent and my origins - my father being from Sardinia...

Around 2002, an American lady approached me by letter, asking if I could translate a series of old stud book prints, showcasing famous historic foundation Arabian stallions which had been standing at stud in Sardinia around the early 1900s... She had found those prints at a local market in the USA ! The prints were handdrawn and handcolored and the accompanying text was in Italian, which she did not understand, therefore her inquiry for a translation... As I went through all those foundation sires, I learned a lot about those Bedouin Arabians and all the details on their breeding career... it was so thrilling and captivated me so much that I asked her if I could get prints of those documents, to keep for myself... She kindly sent colored copies which I now own and treasure...
While creating a pedigree for this mare, I thought I could make her dam trace back to one of those foundation stallions on the prints... I selected a matching one and was able to trace back to him after a long and thorough research, which truly was not easy but so challenging...
Reína Shardana's dam Padria ®, directly descends from Abbayan Sciarragh ® - the foundation stallion pictured on the above right, who was born in Mesopotamia in 1907, stood at stud in different breeding facilities in Sardinia from 1915 to 1934, covering 540 broodmares and producing 211 registered foals (!!!) before being retired in 1934 due to his age...

Reína Shardana is an exquisite Arabian mare... she has a very interesting pedigree, both for the sire and dam line... Her sire is none other than HU Sheikh Imaan ®, who needs no introduction and her dam is a direct daughter of the above mentioned foundation sire, Abbayan Sciarragh ®. She has a beautiful refined and very tipey body, delicate lines and an incredibly good and gentle character, making her a perfect mother to all her foals... She is a beautiful rich black with coppery understones, often going very rusty in the summer, especially for her mane and tail ends...
She is the Zahara resin by Stacey Tumlinson and was customized with a less voluptuous tail and a full milking udder by Sue Kern / Sakori Studios. Reína honors her name and makes us very proud owners... We are excited to discover what more treasures she will gift us with...

Check out her pedigree, progeny & photos below :)

Reína Shardana is a wonderful mare and caring mother... she has gifted MirrorManor with gorgeous foals... We are proud to own this magnificent mare and excited to discover what future treasures she has in store for us...