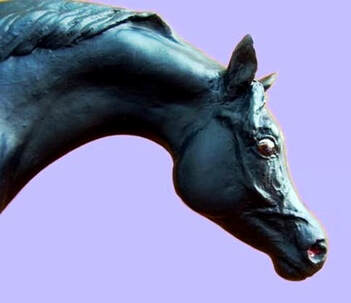 Finishwork : customized, painted & shod by Laurence Cassin / Haras de Falde (France)
photo above is courtesy of Laurence Cassin / Haras de Falde
Shâdhahvâr de Falde is the spitting image of his gorgeous sire, Ouroboros - one of our most demanded and successful stallions...
He has the color and almost identical markings of his father: the shiny pure black coat and as only marking a small faint star, reminiscent of his sire's bold, clean white one, throning in the center of the forehead.
His strong, athletic body, along with his elegant and bold presence and demeanor are a proud testimony of his Babson heritage, coming from his graceful dam Zam Zam.
He came to us from France's talented artist Laurence Cassin, who took Breyer's Classic sized Sagr mold and turned it into this lovely Arabian dream.
His name "Shâdhahvâr" comes from the Arabic شادهوار - a legendary unicorn-like creature, known from the Medieval Muslim zoological literature. It is said that it has one horn with 42 hollow branches on its head, and when the wind passes through them, it produces a pleasant sound, that makes the animals sit around and listen. Horns of those creatures, sometimes gifted to kings, can be played on like flutes. When played on one side, they produce a cheerful sound, and when on the other, the music is so sad it makes people cry. In other sources, it is known as the bold, feral, desert unicorn. Fierce and always roaming alone, too wild to be tamed and too fast to be caught. Except with a trick that consisted in placing a virgin maiden near where a sighting had occurred, so that she'd lure it, to allow the hunters to capture and/or kill it, while asleep in her lap.
The addition of "de Falde" is to credit the artist Laurence Cassin and her studio name "Haras de Falde".

Check out his pedigree & photos below  :)