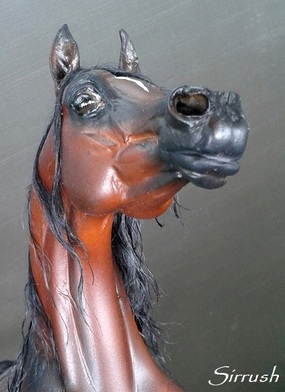 Sirrush (Daidarabocchi x Poupée russe)
Sirrush
Type : Straight Russian
Age : *2008, non aging
Gender : colt
Color : dappled bay
Markings : elongated "rhomboidal" star
Sire & Dam :  Daidarabocchi (*2006) & Poupée russe (*2000)
Sculpture : "Polaris" resin by Debbi LerMond (USA)
Finishwork : painted by Martina Glahe (Germany) & MirrorManor, haired by Inge Böhringer (Germany)
Sirrush is our magnificent bay Straight Russian colt by our grey Daidarabocchi and from our bay Poupée russe...
As one can easily see from the photos, he is truly a magnificent and typey Russian Arabian... He looks like a perfect copy of his sire, but with the striking bay color of his dam, however with a redder shade and soft faint dapples. A lovely elongated rhomboidal shaped star is his only white marking.

Sirrush's name is inspired by the legendary mušḫuššu, formerly also read as sirrušu or sirrush; a creature depicted on the reconstructed Ishtar Gate of the city of Babylon, dating to the 6th century B.C.. It is a mythological hybrid : a scaly dragonlike creature with hind legs resembling the talons of an eagle, feline forelegs, a long neck and tail, a horned head, a snake-like tongue, and a crest. The form mušḫuššu is the Akkadian nominative of the Sumerian MUŠ.ḪUS, meaning "reddish snake", sometimes also translated as "fierce snake". Some authors translate it as "splendor serpent" (MUŠ is the Sumerian term for "serpent").
Sirrush was also known as "red dragon" and depicted as such.

This is the "Polaris" resin, by Debbi LerMond, which is the same as his sire Daidarabocchi. He was painted by Martina Glahe, but his paint job needed a restoration, as it had signs of wear and some marring. We restored it in oils and painted an almost all new head/face with the typical "oiling". The eyes were repainted completely, as well as his hooves. The hairing was done with mohair by Inge Böhringer and restyled by us.