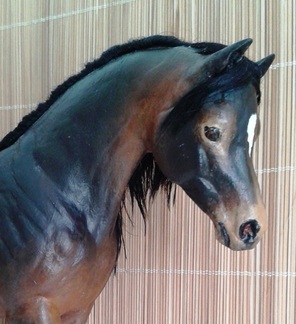 Ylla (My Only Sunshine x Poupée russe)
Ylla
Type : Morab (Morgan x Arabian)
Age : *2006
Gender : mare
Color : seal brown
Markings :  large elongated star, 4 socks with ermine spots
Sire & Dam : My Only Sunshine (*1996) & Poupée russe (*2000)
Sculpture : "Breyer PAM" (Proud Arabian Mare) by Breyer Reeves Co. (USA)
Finishwork : customized by Marie Spinella-Phillips (USA) in 1994 (!!!) with mohair mane & tail & metal shoes
Ylla has truly been "love at first sight" when we discovered her in the sales album of a Swedish collector... It has been a longstanding dream of ours to own one of  American artist Marie Spinella-Phillips's beautiful creations and Ylla fulfilled this dream - finally !
She is - believe it or not - a 1994 work by Marie and is in a fantastic condition which I would consider as "mint", still ! Marie created her out of the Breyer PAM mold - a true classic and favorite - which she impeccably haired with mohair and to which she added custom fitted metal shoes.
A true vintage treasure which makes a gorgeous Morab mare !
This fine lady inherited her Straight Russian dam Poupée russe's beauty and her Morgan sire My Only Sunshine aka Schoggibueb's smashing presence. A photo of this gorgeous champion Morgan stallion is featured in the gallery below.
It was all natural to assign little "orphaned" Antonio (we got him before acquiring her) as her little colt - a Morab too, like mom, even matching her color like magical fate, down to most of the markings ! Eventhough the foal is a creation by German artist Juliane Garstka, they both perfectly match in style; pure magic :)
Ylla was named after the most beautiful Martian lady in the Ray Bradbury Martian Chronicles' TV adaptation of 1980...