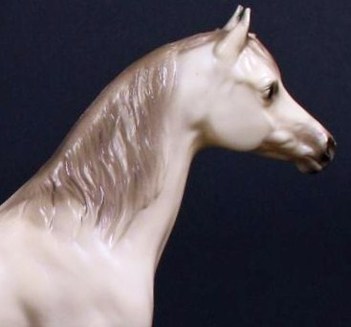 Zam Zam (Ibn Muhandis ® x SK Habibi Faserra ®)
Zam Zam
Type : Straight Babson, Blue Star
Age : *1999
Gender : mare
Color : white grey (black based)
Markings : none
Sire & Dam : Ibn Muhandis ® (*1988) & SK Habibi Faserra ® (*1979)
Sculpture : "Breyer PAM" (Proud Arabian Mare) by Breyer Reeves Co. (USA)
Finishwork : Factory OF (original finish), glossy alabaster old mold version
Zam Zam is a very special gem at MirrorManor... rare and precious like the Holy Water from the spring in Mecca, which she was named after, she is striking and rare in her appearance as she is in her descent...
This mare is a "Blue Star" Arabian mare, which means that her pedigree requires the purest of the pure Egyptian lines... She is a Straight Babson mare by the gorgeous Ibn Muhandis ®, descending from the great Ibn-Fadl ® and the impeccable SK Habibi Faserra ®, descending from the unique Fa-Serr ®... Zam Zam's pedigree speaks for itself...
This mare has produced some of the most beautiful and tipey foals...
She is the notorious "PAM" or "Proud Arabian Mare" mold by Breyer, a great classic among collectors... she is the "glossy Old Mold" variation in "alabaster".
We have imported her from the USA and plan on retiring her soon from breeding, so that she can enjoy her pension here in beautiful Switzerland, after all the lovely and exquisite foals she has given...

Zam Zam is an impeccable mother with a strong character. She is less mellow than our other mares and her many gorgeous pure and partbred foals learn fast !