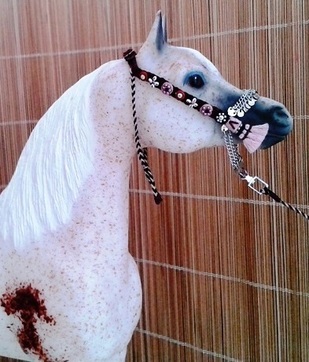 ﻿﻿Ăl-ĭksīr ﻿﻿is my very first Arabian modelhorse... He was purchassed from the Swiss Breyer dealer in 1999... he is number 3'470 out of 10'000 pieces of the limited edition "Freedom" on the Proud Arabian Stallion mold by Breyer... In my modest opinion, my copy is the nicest and has the most realistically rendered paintjob of all those I have seen so far at shows or online... The green halter displayed on the above photo is my very first attempt at a piece of tack and was crafted by me in 2000 for this horse...
He marks my collector start into Arabian modelhorses...
His name is Arabic for "elixir" and does not need much explanation as to the meaning and nice sound when pronounced... a great match for a great model, I think...
Ăl-ĭksīr is a very noble and sweet stallion... he has a gorgeous conformation, elegant and eye catching color and impeccable Asil pedigree...

Check out his pedigree, progeny and photos below  :)

Ăl-ĭksīr is standing at stud at MirrorManor... stay tuned for more beautiful foals by this gorgeous Asil beauty :)