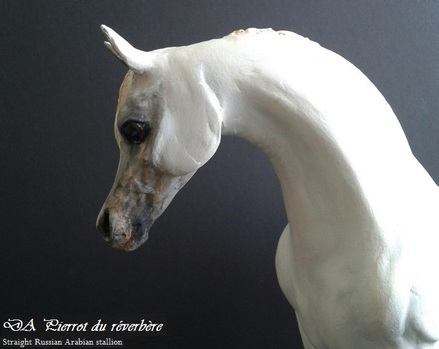 DA Pierrot du réverbère (Saxon Re'em x Wushika Monpelou ®)
DA Pierrot du réverbère
Type : Straight Russian
Age : *2003
Gender : stallion
Color : white grey with depigmentation/Arabian vitiligo (black based)
Markings : 4 stockings/high socks, blaze into snip, pink areas on head, groin, anus
Sire & Dam :  Saxon Re'em (*1996) & Wushika Monpelou ® (*1999)
Sculpture : "IDYYL Arabian" limited edition original sculpture by Karon H. Grieve (UK)
Finishwork : painted by Karon H. Grieve (UK); minimally modified/restored by MirrorManor with the artist's permission.
Breeding : RETIRED
Pierrot is a true RARITY at MirrorManor... he is the product of 2 beautiful Russian Arabians : our own senior stallion Saxon Re'em, who passed his grey gene onto his son and the beautiful and RARE black colored Wushika Monpelou ®, who is by Duval ® (by Vympel ®) and from De Monpelous Berseba ® (by Purpur ®, son of the legendary Pomeranets ®). You can see, Pierrot has a truly solid and refined pedigree.
A knowledgeable friend pointed out to us that this stallion reminds her a lot of the legendary Farazdac ® (*1966) and truly, his topline and overall expression really are very reminiscent of that beautiful Straight Egyptian stallion !
His name bears the sculpting artist Karon H. Grieve's "studio" initials "DA", which stand for Dream Acres and are to be found in every sculptural work of hers. "Pierrot du réverbère" is French and means Pierrot of the (street) lantern, inspired by the immortal Pierrot character, which came to mind when we spotted this particular rarity, in its immaculate, delicate and sophisticated white grey coat, with that vintage air about it...
Speaking of rarities, this piece is among the very first resins in the modelhorse hobby... it was issued by Scottish artist Grieve in the 1990s in her IDYYL line of equine sculptures and not many were made. Needless to say it is rather impossible to find one in good condition. Karon did give us permission to "restore" the finish on this piece, which we are grateful for... We refined the texture/sculptural finish of the mane and tail very minimally, as the texture was brittle and coarse, restored the dark areas on the horse's color a﻿﻿nd added vitiligo markings, which are so typical of many white grey Arabian horses... the eyes were refreshed as well, to give some realistic depth.
(PLEASE keep in mind, that this is a VERY OLD vintage equine figurine and entirely handmade. The structure and overall finish are rough and coarse for today's "standards", which shows in the photos... nonetheless, it retains its own charm and beauty of a true piece of history. With the minimal modifications we did on it, we retained the original artist's
style on purpose).

Pierrot is now retired from his stud career... his many foals continue his legacy and keep winning all over the world !

Check out his pedigree, pr﻿﻿ogeny and photos below :)

﻿﻿This handsome Straight Russian stallion has been a calm and very gentle stud... his foals are classy, tipey and elegant, with the beautiful Russian look in particular. Check them out below :)
﻿