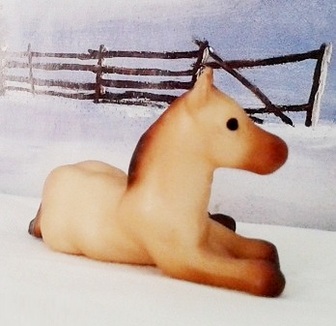 Koh-i-Nuru (Nuru x Aburaya)
Koh-i-Nuru
Type : PBA (AraboTeke x Arabian/Marwari)
Age : *2013, non aging
Gender : colt (twin to filly Mafkharat Nuru)
Color : buckskin (will be a buttermilk shade as adult)
Markings : none
Sire & Dam : Nuru (*1997) & Aburaya (*2006)
Sculpture : "Breyer Stablemate lying foal" by Maureen Love, issued by Breyer Reeves Co. (USA)
Finishwork : Factory OF (original finish)
Koh-i-Nuru and his twin sister Mafkharat Nuru are the 2013 progeny of our AraboTeke mare Aburaya, who was exceptionally leased to the Netherlands to be bred to the exotic black tobiano Arabian-Marwari cross stallion Nuru (*1997) - a son of the Marwari stallion Alamguman ® and from the Egyptian Arabian mare Enayat Allah ®.
Nuru's story & background and mostly his exotic beauty have conquered us and led to this exceptional lease to a breeding with a foreign stallion not owned by MirrorManor.
The beautiful Nuru is owned by the Private Studfarm H. in the Netherlands, whom we want to thank for the mating :)
The result of this breeding was a big surprise, since our Aburaya gave birth to twins ! They are both solid colored and carry the beauty of all 3 breeds involved in the cross : Arabian, Akhal-Teke and Marwari... what a truly exotic oriental mix !
While the colt inherited the creme gene from his palomino mother and is a stunning baby buckskin color, the filly is a stunning seal bay with the typical reddish baby-coat areas and a large elongated star as her only white marking. As adult the colt will be that delicate buttermilk buckskin shade so typical of many Tekes and Marwari specimens and the filly will become a striking dark coppery seal bay.
The name Koh-i-Nuru is a word play, obviously... taken from the famous African diamond Koh-i-Noor which has the magical meaning of "mountain of light". We modified the suffix, using the name of the foal's sire Nuru and think it is really fitting and appropriate. This directly links to the name of the filly, which will be explained on her own page...
The colt is the OF Breyer Stablemate Lying Foal mold that was sculpted by Maureen Love and issued by Breyer.