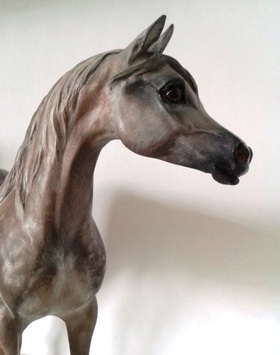 Atlantide (Dea's Gwynplaine x SMS Bint Nahmeh)
Atlantide
Type : Straight Egyptian related
Age : *2012, non aging
Gender : filly
Color : chestnut-going-grey rabicano
Markings : elongated star, narrow snip with small pink "diamond" between nostrils; hind stockings
Sire & Dam : Dea's Gwynplaine (*2001) & SMS Bint Nahmeh (*2005)
Sculpture : North Light (UK) Arabian mold sculpted by Guy Pocock & Anne Godfrey
Finishwork : Customized & painted in oils by Laila Mampell (Germany)
Atlantide has been love at first sight... as soon as we saw her we knew she would be the perfect daughter for our Dea's Gwynplaine, as she carries the same refined, delicate features and soft expression... Finally, after almost a year, we were able to fetch her, from a German collector and are so honored and thrilled to have been approved to use the beautiful mare SMS Bint Nahmeh, a daughter of our own Ouroboros (!!!) as her dam. Bint Nahmeh has an incredibly beautiful color and makes a wonderful mother for this filly.
Atlantide was named after the utopic island, to reflect the hyperbolic and sought after beauty of something magical and so perfect that it seems illusory. The name works fine in French or Italian and has the same lovely sound in both languages :)
Actually, when we unwrapped her, we were truly blown away by the amazingly detailed and elaborate paint job on such a simple and vintagy mold - the North Light Arabian. German artist Laila Mampell customized it into a mare, with teats and a resculpted head and entirely painted it in oils.
The rabicano markings are a gift from her father - Dea's Gwynplaine, who also passed on his lovely chestnut coat, whileas the grey gene is inherited by Atlantide's lovely bay-going-grey dam.
This piece is a real work of Art... each time one discovers new details on her... she really makes us proud :)

Check out her pedigree & photos below :)