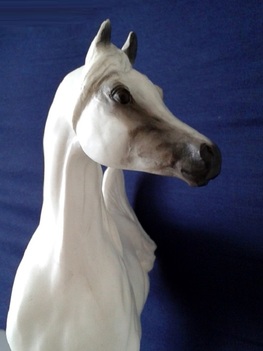 Saïgon is an elegant and refined looking Straight Russian/SE related colt by our depigmented white grey Straight Russian DA Pierrot du réverbère and our black SE related mare Reína Shardana. Both these outstanding parents passed on their lineage and beauty onto this noble white grey colt, who proudly carries an impeccable and interesting pedigree.

Saïgon has been named after one of Vietnam's beautiful cities... The name is again spelled in French and reminiscent of the old days, when Saïgon was immersed in century old tranditions, perfumes and colors and when life followed another pace. His immaculate white coat is reminiscent of the beautifully scented jasmine rice, which looks so beautiful and simple in an oriental bowl.
This is the rare "Sshameless ++" model by Breyer, done on the "Sham" mold, sculpted by Rich Rudish. We received him as a gift from a Swiss friend who sells Breyer modelhorses :)
Thank you to our friend Beatrice, for this wonderful gift !