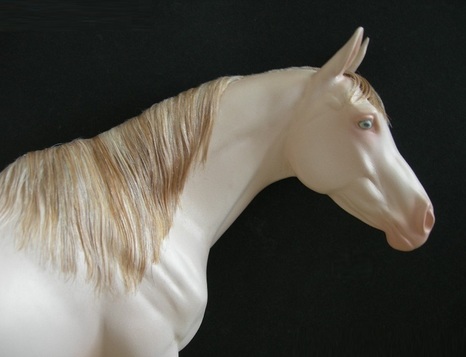 Pan Tau (Thomtidom x Amaki's Impeccable ®)
Pan Tau
Type : Arabo-Teke (Arabian x Akhal-Teke)
Age : *2009
Gender : stallion
Color : perlino (double diluted bay)
Markings : hind socks
Sire & Dam : Thomtidom (*2003) (smoky creme Akhal-Teke) & Amaki's Impeccable ® (*1990) (perlino PBA)
Sculpture : "Nadjaar" resin by Brigitte Eberl (Germany), customized by MirrorManor
Finishwork : painted & haired with mohair by Faye Cohen / Ansata (USA)
Breeding : OPEN TO PURE-, PARTBRED ARABIAN &  AKHAL-TEKE MARES
Pan Tau is a very special young stallion... he is by our premium stud Thomtidom and a full brother to our Aelia Laelia filly...
He was love at first sight when seen at live shows Brigitte Eberl attended with unpainted copies of "Nadjaar" for sale... at Halloween 2010 finally, during a visit at her studio in Munich, I spotted a copy of the resin under cobwebs and lots of dust... Brigitte explained that he was a "second" casting, as there were some minor flaws that would require attention during the prepping process and he was modestly priced accordingly. She said he had been taken to shows a while with the other resins to be sold, but no one had wanted him and he kept gathering dust and webs... I just had to "save" him and already envisioned him in a delicious double diluted coat by the one and only Faye Cohen... having a paid in full spot with her but yet no resin to send to her, I thought it would be the perfect one for her to work her magic on... that is how Pan Tau was born : a striking partbred Arabian colt of almost 3 years of age in a shimmering, delicate and seducing perlino, with lifelike mohair mane and tail and all the details Faye is so known for...

Like his father, he too sports the name of a magician and character that marked my childhood... Pan Tau which means "Mr. Tau" in Czech, is a character created for a children's television series made in the old Czechoslovakia, airing in the 70ies...

Pan Tau is a gorgeous colt that is now eager to serve your mares :)

Pan Tau is a princely stud at MirrorManor Arabians :)
Like his sire, the color palette he can throw, depending on the mare, is exquisite... from simple dilutes and double dilutes...
Pan Tau is open to select pure and partbred Arabian and Akhal-Teke mares...
Please contact us with your mare's information if you want to breed her to this extraordinary and exotic beauty !