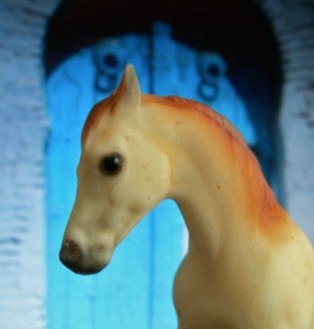 Bint Bhendi (Ăl-ĭksīr x Authentic Nabeelah ®)
Bint Bhendi
Type : Straight Egyptian
Age : *2007
Gender : mare
Color : chestnut going fleabitten grey
Markings : none
Sire & Dam : Ăl-ĭksīr (*1999) & Authentic Nabeelah ® (*2001)
Sculpture : "Breyer G1 Stablemate Arabian Mare" by Breyer Reeves Co. (USA)
Finishwork : OF (original finish) Regular Run 1998 in "red roan"
Bint Bhendi was named in honor of my best friends' family name "Bhend"... she was an unexpected gift to us and now happily resides at MirrorManor, as one of our Egyptian broodmares :)
She is the Breyer Stablemate Arabian Mare mold of the 1st generation (G1), originally sculpted by Maureen Love for Hagen-Renaker... she is in the OF "red roan" color and makes a perfect fleabitten chestnut going grey mare...
She is a purest Straight Egyptian Arabian, descending from some of the greatest Egyptian Arabians, such as Alidaar ® or Morafic ®... Her dam is the lovely chestnut beauty Authentic Nabeelah ® and her sire is our own Ăl-ĭksīr...

Check out her pedigree, progeny and photos below  :)

Sweet Bi﻿﻿nt Bhen﻿﻿di has produced a few most beautiful and tipey foals... Her classy and refined Egyptian heritage is evident in her progeny.
Check it out below :)