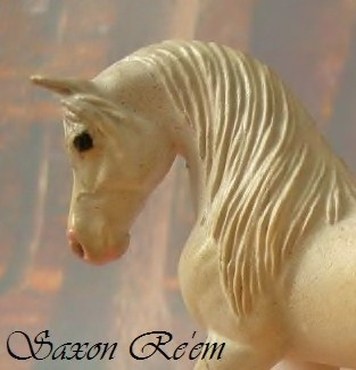 Saxon Re'em (Muscat ® x Ninaska ®)
Saxon Re'em
Type : Straight Russian
Age : *1996  -  † 2013
Gender : stallion
Color : fleabitten grey with minimal vitiligo (chestnut based)
Markings : pink muzzle, faint pinking around eyes and on gentials
Sire & Dam :  Muscat ® (*1971) & Ninaska ® (*1981)
Sculpture : "G3 Stablemate Arabian" by Jane Lunger for Breyer Reeves Co. (USA)
Finishwork : painted by the late Saxon Simpson (USA)
Breeding :  DE﻿﻿C﻿﻿EASED
Saxon Re'em is a very special horse to me... He was an unexpected gift from an internet friend named Saxon Simpson (*1946 - †October 2nd 2007). I got him a few months before Saxon passed away from pancreatic cancer and named him in honor of her: Sax﻿﻿on to keep her beautiful unusual name and Re'em after the biblical Hebrew name for the "unicorn"...
Re'em is our second Straight Russian stallion... he is the son of the immortal Muscat ® and is a very lovely stallion, now almost 20 years of age and still stands at stud for some select purebred and/or partbred Arabian mares...
He has a soft fleabitten white grey coat with delicate pink skin on his face and genitals from vitiligo, which is very common in Arabians and which we particularly love on Arabians and always hope to pass it onto offspring we breed...
Re'em is a very sweet and calm stallion, which can be regarded as the "aged gentleman" of our barn...

Sadly, we have to report, that our beautiful Saxon Re'em has u﻿﻿nexpectedly passed away.

Saxon Re'em has sired many beautiful foals worldwide. Find some of his MirrorManor bred progeny below.
Sadly, Saxon Re'em is not available for breeding any more. We have to report that he unexpectedly passed away.